The church was built in 1520 at the initiative of Jonas Jonavičius Zabžezinskis, overseer of Simnas and later the Grand Marshall of the Grand Duchy of Lithuania. In the 18th century, the church‘s steeple was raised, and the presbytery, side chapels, matrones the northern sacristy and the Chapel of the Holy Rosary were built. Archival sources indicate that in 1742 there were six piers (pillars) and five altars in the church. There were six burial cripts under the church. There was a three-storey bell-tower and a wood-shingled chapel in the churchyard. In 1938-1940,  the capital repair works led by engineer Karlis Reisons were completed. In 1989, a new bell-tower was built in the churchyard. In 2008-2010, restoration works were performed on the church‘s exterior. In 2015-2017, research and restoration works were performed on the high altar.
This is the only Renaissance-style church with Latin cross plan in Lithuania. The interior is dominated by the high central nave. The side naves are separeted from the central nave by three pairs of massive piers joined by arches, and the presbytery is separated from the central name by a semi-curcular triumphal arch. The ceiling of the central nave is a barrel vault with lunettes, the ceiling of the northern nave consists of barrel vaults, and the ceiling of the southern nave consists of cross (groined) vaults.
There are many valuable works of sacred art in the church. The altar of the Holy Rosary, over which a painting of the Most Blessed Virgin Mary hangs, received a privilege from the Bishop of Vilkaviškis in 1928.
An organ crafted by the prominent Lituanian organ-builder Jonas Geralevičius was installed in the chuch in 1911.
In 1972, while Father Sigitas Tarnkevičius (the Cardinal) was serving at the church, he initiated the underground publication Chronicle of the Catholic Church in Lithuania.
The church is listed on the Register of Immovable Cultural Heritage of the Republic of Lithuania. 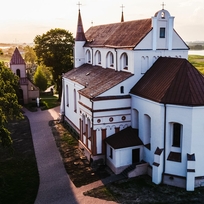 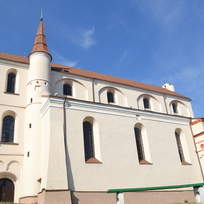 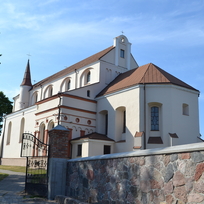