A Triangle-Shaped Square in Butrimonys

Butrimonys was founded on the crossroads of three roads: from Vilnius to Alytus and Punia. Therefore, this triangle-shaped square once formed became a market square. Around this market place, land parcels were partitioned and allocated to the merchants and craftsmen, thus causing development of the entire town. In the old part of the town, which had been formed before the end of the 18th century, one can walk the same old streets and, finally, reach the same old triangle-shaped square. This place has a shape of an equilateral triangle. Such type square is the only one in Lithuania and included into the List of Urban Monuments. This historical square is surrounded by houses of merchants and craftsmen, built at the beginning of the 20th century. The unique triangle-shaped square in Butrimonys is depicted on the coat of arms of the town, approved by Lithuanian President on 22nd August 2001.
The space in the square became even more beautiful after reconstruction in 2019, and since then this place attracts many locals and others. And no wonder, as everybody enjoys it: children have playgrounds with outdoor musical instruments and swings as a must; a drinking water installation invites to quench thirst… And a symbol from the old square, a stone weighing 58 t, gives a special charm to this space: it has an inscription carved in 1999 “To The Fighters for Lithuania’s Independence”. A wooden sculpture “A Lithuanian Girl” (authored by A. Judickas), which stands nearby, provides additional meaning to this symbol. Still the fountain, the only one in Lithuania vortex water fountain, remains the main attraction in the square. 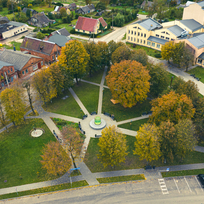 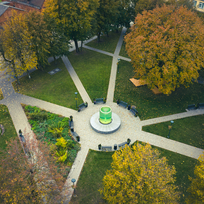