The Saviour’s Church in Butrimonys

The first church in Butrimonys was erected in the 18th century and it was a wooden structure. Later the church was restored, reconstructed, and, finally, a new one was built. There was a project of the church’s reconstruction prepared in 1901, yet it remained not implemented. In 1906, in accordance with the architectural project of A. Filipowich-Dubovsky, a stone church, which survived until our days, was commenced. The festive consecration ceremony of foundations took place on May 13th 1908. During construction of the church, the old one was not demolished, it remained inside the new building. The construction works on the stone church were interrupted by World War I. The massive single-tower church was completed in 1926 only. The style of the church is eclectic with some signs of Romanesque style; the facade tower is situated on the right. The church houses valuable artworks of painting and folk art of early 19th century, as well as early creative works of the outstanding artist Antanas Kmieliauskas, who was born in Butrimonys neighbourhood. The churchyard is enclosed by a stone fence, having a gate with three arches. 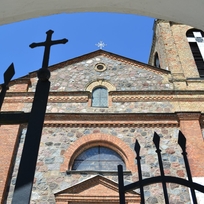