The Rumbonys Mound has an interesting past. According to the legend, there was a castle on the mound with secret underground caves in the basement stretching even underneath the Nemunas River. They meandered for several kilometres and connected with the Castle of Punia. Even Crusaders would not have defeated the Castle of Punia in 1336 if they had not found these underground paths shown by a traitor tempted by proposed treasures. Crusaders invaded the fortress of Punia through them. The mound dates back to the 1st millennium – early 2nd millennium. Its slopes are steep, 12-30 m high. 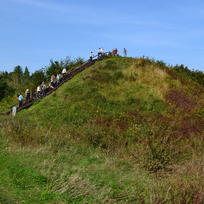