The Punia Mound is one of the biggest and most beautiful in Lithuania. It is situated at the confluence of the rivers Nemunas and Punelė. The mound can be easily found – there is a path from the church leading to the west, one has to take the path and follow it for about 200 metres. There is a legend telling that the duke Margiris had his castle on the mound of Punia and it was called Pilėnai. The mound saw the famous battle of Pilėnai in 1336. Defenders of the castle and residents chose to die in flames rather than surrender and be brought into captivity by the crusaders.
According to the legend, on the opposite side of the Nemunas, on the Mound of  Rumbonys, there used to be underground caves in the basement of the castle even under the  Nemunas. They wound their way for several kilometres and reached the Castle of Punia. The crusaders would not have conquered the castle of Punia, even if they had not found these underground tunnels which were used by Margiris’ knights to bring some food and weapons from the castle of Rumbonys. Unfortunately, somebody turned traitor and was tempted by offered treasures. The traitor showed the secret underground way and the crusaders managed to invade the fortress of Punia.
After thorough explorations of the mound, archaeologists identified that there was a castle on the mound in the 13th and 14th century which was burnt down. A new castle was built instead in the 15th century. However, the latter also burnt down in less than a century and at the end of the 16th century a new big mansion was built here. Later it simply rotted away. 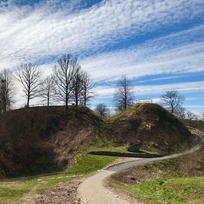 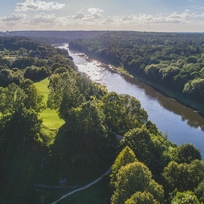 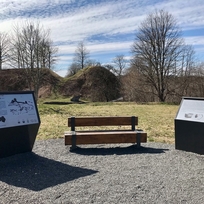 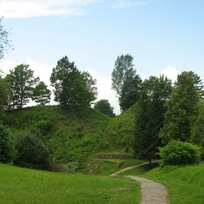