Construction of the modern, spacious Riflemen’s House was completed in 1938. It was named after Antanas Juozapavičius, the first military officer to be killed in the Wars of Independence, and was popularly called Kurhaus. The first floor had a large hall with a stage, a lobby with a canteen and a porch with a restaurant. Jazz was played there in the evenings. The second floor was occupied by the riflemen’s club and a museum dedicated to Juozapavičius. The basement had an exercise area. During the Soviet period, the building was used as a cultural centre. It was given back to Alytus Riflement’s Union after the Restoration of Independence. 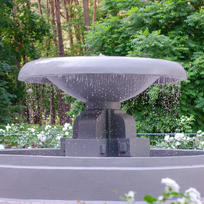