Olakalnis, a former mountain of offerings, is near Miroslavas. According to the story, in pagan times, it was a place where various offerings were sacrificed to the gods. Elder residents remember the stories of their parents, according to which the Napoleonic army was hiding treasure inside the mountain, and therefore, in the middle of the 19th century a drover of the Bendriai manor would find silver coins there. 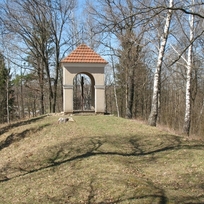