A Monument in Memory of Lithuanian Partisans “They Gave Their Lives for the Homeland 1944-1949.”

About 40 Lithuanian partisans lost their lives in Butrimonys neighbourhood in 1944–1949. The bodies of many local partisans were desecrated in the central square of Butrimonys town and later buried secretly in different locations. In the summer 1990, a search for partisans’ remains was organized. The remains of four partisans were found. They were reburied in the cemetery of Butrimonys. According to the Cultural Heritage Department, five partisans of the Duke Margis Unit of the Dzūkai Squad of Dainava District were buried in this grave. In 1993, a monument was unveiled and consecrated in this burial location containing the main plaque with an inscription “They Gave Their Lives for the Homeland 1944–1949”. Other plaques were erected with the names and surnames of killed partisans, burial places of whom had not been found.
In 1999, within the framework of festivities devoted to 300-th anniversary of Butrimonys town, a stone in the central square, where the process of partisans’ bodies desecration had taken place, was marked with an inscription: “To The Fighters for Lithuania’s Independence”. 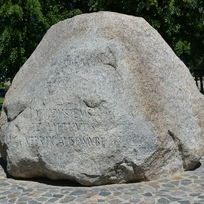 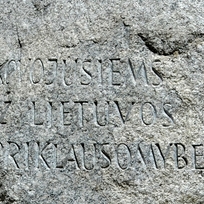