According to the historian Sigitas Jegelevičas, this stone is associated with the old holy places and was "<...> a place of worship for the inhabitants of this place. The appearance of this monument could be associated with the end of the late New Stone Age (Neolithic) period when well-fortified settlements appeared." The water collected in bowls of sacred stones was considered holy and had healing powers. The stone is also called "Meskaraištis bowled stone" in another way.
The stone is included in the Register of Immovable cultural values. 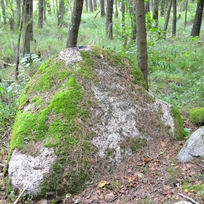